We provide energy harvesting traces from a variety of scenarios and a Python implementation of Bonito as open source. If you want to learn more, read our detailed description.

As the Internet of Things (IoT) grows to trillions of devices, sustainability and reliability of this computing infrastructure become matters of utmost importance. One possible path to sustainability is the adoption of battery-free devices that buffer energy harvested from the environment in a capacitor. Battery-free devices promise to overcome the drawbacks of (rechargeable) batteries, such as bulkiness, wear-out, toxicity, uncertain remaining charge, etc. Leaving batteries behind allows for building cheap, tiny, and maintenance-free devices that can be embedded into smart textiles, intelligent surfaces, or even the human body.

The power that can be harvested from ambient energy sources can vary significantly across time and space, and is often too weak to directly power a battery-free node. Thus, as illustrated in the figure below, a battery-free device first needs to buffer sufficient energy in its capacitor before it can operate for a short period of time; then the device turns off until the capacitor is sufficiently charged again. As a result, battery-free devices operate intermittently.

Just like in conventional battery-supported networks, direct communication between battery-free devices is desirable, for example, to increase the availability of the system, to enable novel applications, and to reduce infrastructure costs. However, to communicate with one another, sender and receiver must be active simultaneously for at least the airtime of one complete packet. This is difficult in battery-free networks for three reasons:

The resulting key challenge is that the short activity phases of different nodes are generally interleaved. Therefore, it can take a very long time until nodes encounter each other. Moreover, after an encounter, the nodes quickly get out of sync, as illustrated in the figure below. This is because ambient energy varies across time and space, which leads to fluctuating and different charging times between the nodes.

Bonito is the first connection protocol for battery-free wireless devices. It provides reliable and efficient bi-directional communication despite the time-varying intermittency of battery-free devices. Unlike the state of the art, Bonito enables two battery-free nodes, after an initial encounter, to maintain a connection across multiple consecutive encounters. To this end, Bonito continually adapts the connection interval, which is the time between the end of an encounter and the beginning of the next encounter. Instead of waking up right after reaching the turn-on threshold, nodes delay their wake-up until the connection interval has passed. 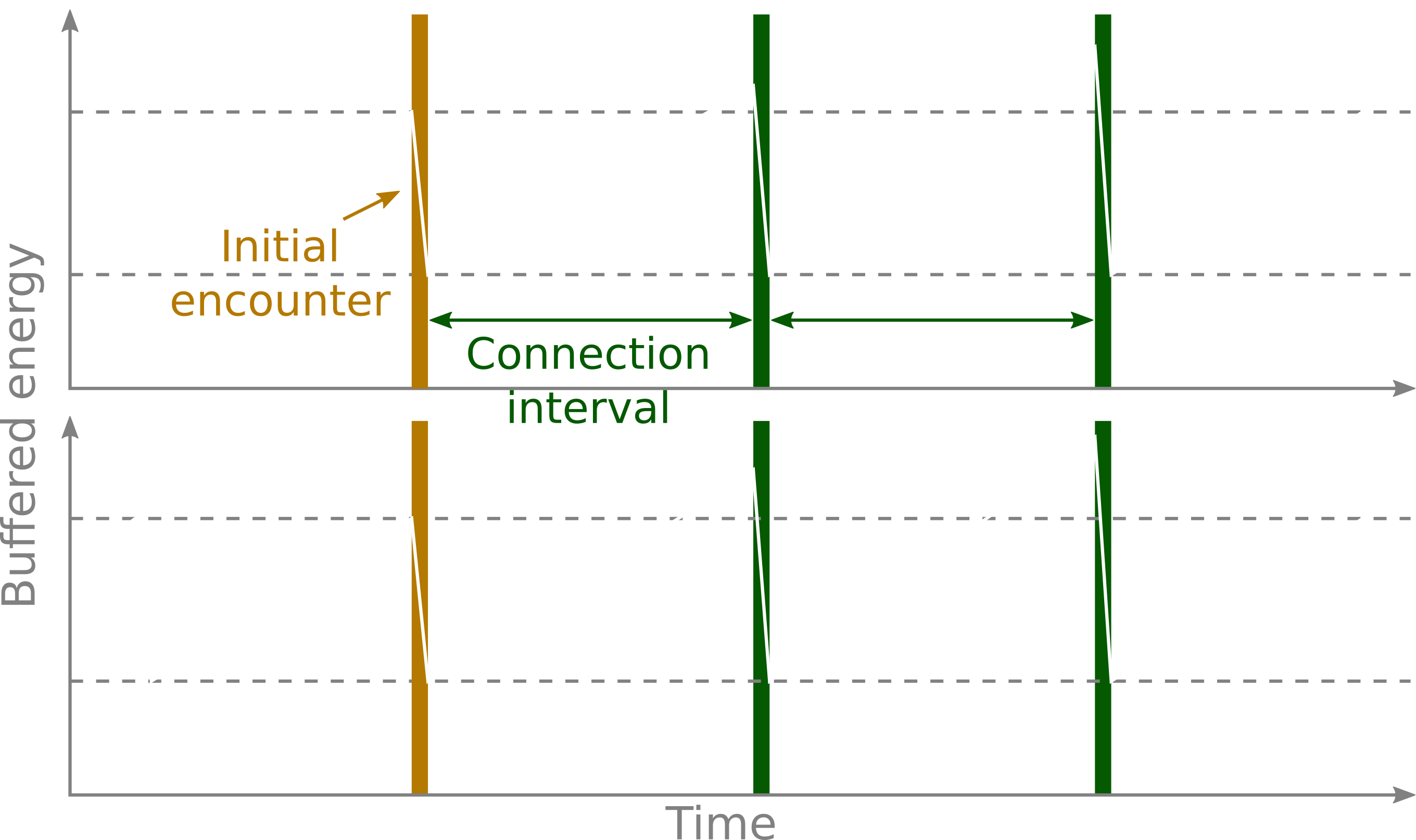 With Bonito, each node continuously learns and tracks the parameters of a model that approximates the distribution of locally observed charging times against non-stationary effects (e.g., changes in mean or variance). Then, to maintain an efficient and reliable connection, the nodes exchange at every encounter their current model parameters and jointly adapt the connection interval.

We provide real-world energy-harvesting traces from five diverse scenarios involving solar panels and piezoelectric harvesters on Zenodo and a Python implementation of the Bonito protocol under an MIT license in our GitHub repository.

The data is provided as one hdf5 file per dataset containing time-synchronized power traces with a sampling rate of 100kSps.

We provide a Python implementation of the Bonito protocol and two baseline approaches. The provided code allows converting harvesting power traces of two nodes to sequences of charging times of the two nodes. The resulting charging time traces can be analyzed and used to learn the parameters of a charging time distribution with stochastic gradient descent. The learned parameters at every step can be used to compute a connection interval. If the resulting connection interval is greater than the charging times of both devices, the encounter is considered successful.

Bonito is being developed at the Networked Embedded Systems Lab at TU Dresden. If you have any questions, get in touch!